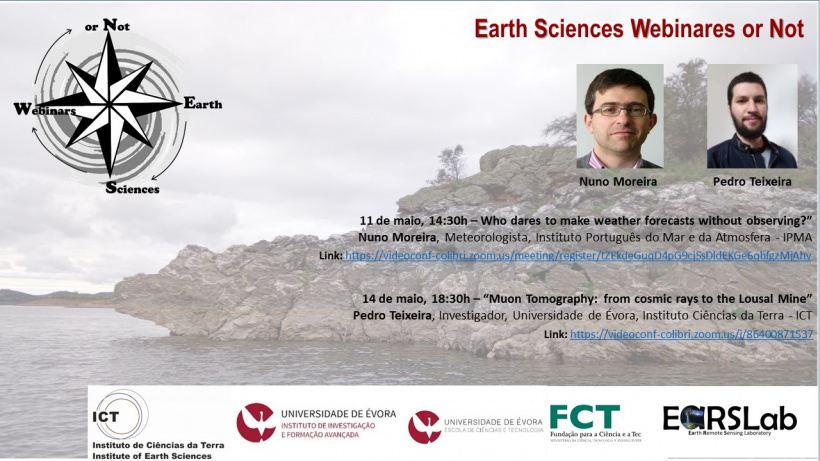 Who dares to make weather forecasts without observing?

Abstract: In this lecture, the theme of meteorological forecasting will be discussed, detailing the activities of the Portuguese Institute for Sea and Atmosphere (IPMA) in this field. The importance of the observations will be presented, both from the perspective of weather watch and in the definition of the initial and boundary conditions of Numerical Weather Prediction (NWP) models. The topic of meteorological warnings will also be addressed, in a phase in which, in addition to the use of climatological thresholds, their orientation according to impacts is discussed, which thus also have to be observed and systematized.

Muon Tomography: from cosmic rays to the Lousal Mine

Abstract: Muon tomography is an imaging technique that uses muons, a natural background radiation, as a means of observing the Earth’s subsurface. Muons are elementary particles like electrons, but with a mass over 200 times larger, capable of crossing hundreds or thousands of meters of matter, if they have enough kinetic energy. Muons are a subproduct of cosmic rays hitting our atmosphere. They travel in straight lines at relativistic speeds and have a small interaction with the particles that they come across, losing some of its energy in the way. The denser the material, the higher the particle interaction and the fewer the muons pass through. With suitable detectors it is possible to create muographs (muon radiographs) to obtain the column density distribution of the surveyed region, which results from the attenuation of the different materials in the muon flux. The method appeared in the field of particle physics some decades ago. Its application methods have evolved since then and, nowadays, it has been applied internationally in several areas. In Portugal, the first application is in development in an underground environment. A collaboration between the Instituto de Ciências da Terra (ICT) – Universidade de Évora, Laboratório de Instrumentação e Física Experimental de Partículas (LIP), and Centro Ciência Viva do Lousal (CCV) has been established as the LouMu Project to evaluate the potential of muon tomography
for geophysical prospecting with muon telescopes developed by LIP. The chosen location is the Lousal mine, located in the western region of Alentejo. The application will do a geological recognition of the terrain between the telescope and the surface, to map structures and ore masses already known and to improve the existing information with new data.
Other geophysical methods are being used on the surface of the terrain to build a reference model. The goal is to use all the information gathered to build a 3D density model of the studied region, using muography as a central technique.